Montgomery County, Tennessee, population 172,331, is located 30 minutes northwest of Nashville at the Tennessee-Kentucky state line. We are one of the most historic, yet progressive counties in the region and home to the fifth largest city in the state.

Clarksville, Tennessee, population 132,929, is located about 35 miles northwest of Nashville, and south of the Kentucky border. Interstate 24 has four exits to access the state’s fifth largest city, and the Exit 4 area is the major retail corridor with a mall and various shopping centers located along Wilma Rudolph Boulevard, which pays tribute to the city’s Olympic gold medal-winning native.

Clarksville is growing rapidly with a current population of 133,000, which is a 28 percent increase since 2000. Along with Montgomery County and other surrounding counties, the Metropolitan Statistical Area population is just less than 275,000, which is an 18.8 increase since 2000. Growth in the community shows no signs of slowing; Clarksville and Montgomery County have a total of 8,776 residential lots approved for building.

Approximately 80 percent of active-duty soldiers and their families choose to live in Clarksville and the second-highest number of military retirees in the nation live around the city. The number of military families making their homes in Clarksville, even after leaving the Army, makes it a youthful market with a median age of 29.  The military background of so many in the community provides a highly skilled work force that is very trainable.

Additionally, Clarksville is home to one of the fastest growing four-year universities in Tennessee. With an enrollment of more than 11,000, Austin Peay State University is adding student housing on campus and is anticipating more building without the aid of state funding. 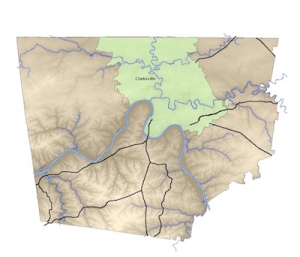