Springfield is a beautiful and historic community located in scenic Robertson County, one of Tennessee’s leading counties in agricultural production, population 14,332. Robertson County was named in honor of General James Robertson, the founder of the Cumberland Settlements. Thomas Kilgore established the first settlement in Robertson County on the Red River in 1779.

Millersville, population 5,308, is located in the middle of Tennessee, approximately 20 miles north of Nashville and sits on the boundaries of Sumner and Robertson Counties.

For more information about Millersville’s history and progress, feel free to contact the staff at City Hall or contact the Millersville Civic Club. Be sure to also check out our City Newsletter to find out the latest happenings in the City of Millersville.

Portland, population 12,522, is located in northern middle Tennessee, we’re about 30 minutes north of Nashville, where Interstates 65, 40 and 24 intersect, and places travelers within a day’s drive of about 50 percent of all the U. S. population.  The proximity to Nashville creates opportunities  for industrial, distribution, and warehousing facilities.

Portland was originally named Richland Station after the railroad depot erected there for the then-new Louisville and Nashville Railroad.  Because there was confusion later with another Richland on the railroad lines, Richland Station was renamed Portland in 1888, and then incorporated in 1905.  For most of its history, Portland was known as the “Strawberry Capitol” of the state. The Middle Tennessee Strawberry Festival, is still our trademark, we celebrate this tradition each year in May.

Adams, population 566, was developed in the late 1850s as a station on the Edgefield and Kentucky Railroad (later part of the L&N system). Most of the city’s early buildings were destroyed during the Civil War. The city originally incorporated as Red River in 1869, but was renamed Adams Station in honor of James Reuben Adams, who owned much of the land on which the city was built. The name was simplified to “Adams” in 1898. By the late 1880s, Adams was home to several stores, a flour mill, two churches, and a school. The city repealed its charter in 1899, but reincorporated in 1908, and incorporated as a city in 1963

During the 1920s, Adams began to receive a steady flow of automobile traffic due to its location along U.S. Route 41, which was one of the main roads linking the Chicago area with Florida. The city began to decline in the mid 20th century with the discontinuance of passenger rail traffic and the construction of Interstate 24 and Interstate 65 (which drew much of the automobile traffic away from US 41).

Adams is the site of an infamous haunting, the Bell Witch. The first manifestations of the Bell Witch haunting supposedly occurred in 1817 through 1820 on a farm owned by John Bell.  A memorial to the Bell family can be found at Bellwood Cemetery. The city’s municipal offices are now located in the former Bell School, which was built in 1920 and named for a descendant of John Bell. A log cabin built by John Bell around 1810 has been relocated to a plot across from the Bell School.

Cedar Hill, population 298, was once a busy farming community in the 1940’s through the 1950,s with the main crop being tobacco.  By the 1960’s, crops became more diversified and more farmers had cars, enabling them to travel to the county seat of Springfield, about nine miles away. At about this time, the construction of the Interstate Highways 24 and 65 diverted much of Cedar Hill’s through traffic. These factors led to a continuing, steady decline in population and economic activity.

Coopertown, population 3,510, is located 25 miles north of Nashville and 20 miles south of Clarksville on Interstate 24 in Robertson County, Tennessee. At nearly 25 square miles, Coopertown is a beautiful farm community that prides itself on family and community. The people of Coopertown understand the value of planned growth and the need for proper zoning to maintain its beautiful country charm.

Cross Plains with population 1,381, was the first settlement in Robertson County.  It was founded in 1778 by Thomas Kilgore on the waters of the Middle Fork of Red River.  Cross Plains is the second oldest town in the county. The first building was a double log house erected by William Randolph in 1819, and used as a tavern.

Greenbrier, population 4,940, is located 23 miles north of Nashville in Robertson County.  We were incorporated in 1937 and are governed by a Board of Mayor and Aldermen. Since Greenbrier is located so close to major shopping and entertainment venues, we are able to offer a small, friendly community without losing the amenities of a big city.

Ridgetop, population 1,083, is located in southern Robertson County and derives its uniqueness from the topography and climate of the area. It’s located at the edge of the Highland Rim over 800 feet above sea level. Ridgetop was settled in the early 1800’s and played a role in the social life of turn-of-the-century Nashville. This was the era of the inner city elite who could afford to take vacations during the hot summer months, and escape to Ridgetop then known as “The Enclosure” resort and spa. Today Ridgetop is a beautiful small thriving community still welcoming with open arms and southern hospitality.

Originally known as Tennessee County, along with Montgomery County, of the Cumberland District of North Carolina, Robertson and Montgomery Counties ceded naming rights to the new state in 1796.

Whiskey and Tobacco were the major industries of early Robertson County. After the Civil War, the whiskey era boomed. But then came Prohibition and the end of the Whiskey Industry. In 1993, Robertson County produced over 8 Million Pounds of Dark Fired Tobacco. We are the home of many industries and a diverse agricultural production.

Located on the northern section of Middle Tennessee, on the Highland Rim of the Cumberland Basin, Robertson County is 477-square miles. Home to 10 incorporated cities, according to the 2000 census, the County’s population stood at 54,433

Robertson County Chamber of Commerce has data on industry and growth within the county. Reach them at (615) 384-3800 or by e-mail: info@robertsonchamber.org. 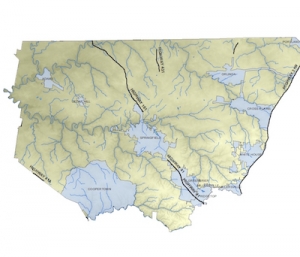